Dodos may have been extinct for the last 400 years, but they were actually around far longer than humans! About 8 million years ago, the island of Mauritius was formed in the Indian Ocean.  Scientists think the dodo’s ancestors arrived not long afterwards and found the island such a good place to live that they stayed.  Eventually, with no natural predators, the birds evolved to better suit their environment, growing much bigger and losing the ability to fly.  So, Dodos survived for multi-million years – compared with the mere 200,000 years or so that mankind has been around!

Mauritius is marked with the red spot!

People think dodos died out because they were hunted for food by Dutch and Portuguese sailors in the early 17th century.  But in 2013 a study of excavated waste pits indicating what early Dutch settlers ate for dinner found plenty of animal bones, but not a single dodo bone among them!  From the description opposite, it seems as though Dodo meat wasn’t considered pleasant and smaller birds were more commonly eaten.

In fact, it is now thought more likely that it was the animals the sailors brought – such as pigs, dogs and rats – which killed off the dodos.

Vice Admiral Wybrand van Warwijck, who led an expedition to Mauritius in 1598 wrote:

“There are also other birds there which are as big as our swans with large heads and on the head a veil as though they had a small hood on their heads; they have no wings but in their place are three or four black quills and where there should be a tail, there are four or five small curled plumes of a greyish colour.  We called these birds Walghvogels, partly because although we stewed them for a very long time, they were very tough to eat, yet the stomach and breast were extremely good, but also we thought the turtle doves had a rather better taste and we could get many of these.” 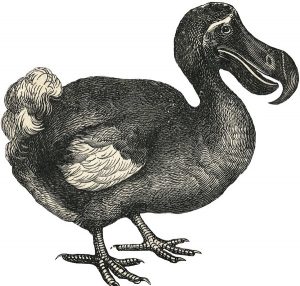 Dodos were given a variety of names in the early years:  The Dutch originally called them Walghstocks or Wallowbirds and some Portuguese sailors called it a penguin (possibly mangling up the word ‘pinion’ which means ‘small wing’).  No one really knows where the word Dodo came from: perhaps from the Portuguese word ‘doudo’ which means ‘crazy or the Dutch word ‘dodoor’ which means ‘sluggard’.  Who knows?

When they weren't busy hunting, clubbing and roasting Dodo Birds, the Dutch and Portuguese settlers of Mauritius did manage to ship a few living specimens back to Europe. While most would have died on the months-long journey, a few (apart from Montgomery Puff, of course) probably did make it to England alive.  A manuscript in the British Library written by Sir Hamon L’Estrange from around 1638 reads:

“About 1638, as I walked London streets, I saw the picture of a strange looking fowle hung out upon a clothe and myself with one or two more in company went in to see it.  It was kept in a chamber and was a great fowle somewhat bigger than the largest turkeycock and so legged and footed, but stouter and thicker and of a more erect shape, coloured before like the breast of a young cock fesan and on the back of a dunn or dearc colour.  The keeper called it a Dodo.”

Spelling was a bit different back then!

Dodos have come in and out of fashion a number of times and in the Victorian times there was a surge of interests in the already exinct birds.  Much of this was fuelled by a charity worker and teacher based in Mauritius, George Clark, who discovered large numbers of fossil remains of dodos at the Mare aux Songes marsh in southwest Mauritius in 1865.  He sent many of these back to England, where they were the basis for much research.  Some of them were as old as 4,000 years old! 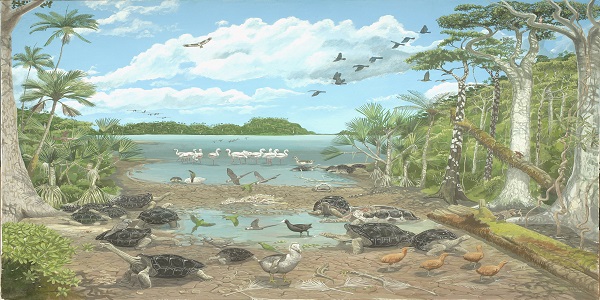 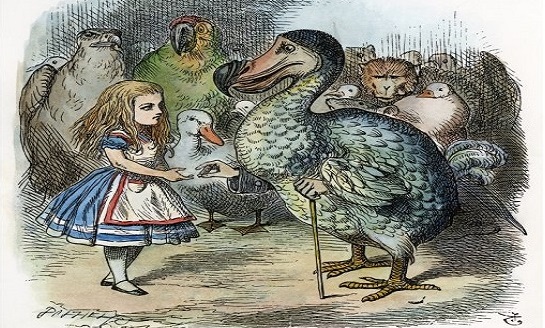 Also in the Victorian age, a dodo appeared in Alice in Wonderland by Lewis Carrol.  Like Montgomery Puff, this dodo was quite an authoritative (in other words, bossy!) character.  The character was made famous by Sir John Tenniel’s illustrations.

Dodos were members of the pigeon family and its closest living relative is the Nicobar pigeon.  Dodos had enlarged olfactory bulbs, suggesting dodos may have had a better sense of smell than most birds, which could have helped it sniff out ripe fruit and other food in the island’s thick vegetation.

In early July 2007, scientists working on the island of Mauritius, east of Madagascar off of the coast of Africa, announced the discovery of the best-preserved dodo skeleton ever found. It appears complete and is one of only two of the extinct bird that's been unearthed. The find, which was kept secret for several weeks while the site was examined and the skeleton collected, may provide valuable DNA samples.

This find raises the question: Can scientists resurrect the dodo bird? 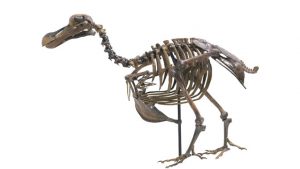 The Dutch settlers reported the dodos lived on the shores of the island – much of the centre of the island was impenetrable dense tropical forests – where they were easily caught.  But as they grew wary of man, some may have retreated into the forests.  There are some people today who believe the species never actually died out, but that some remain hidden deep in the forests to this day…

Dodos have featured in dozens of books, films and even in advertising.  In 1999 Tesco capitalised on the dodo’s extinction in a series of adverts starring Derek the Dodo, using the tagline ‘Hurry, they won’t be around for ever’.

Other things to watch:

The Lonely Dodo, narrated by Stephen Fry for the Durrell Wildlife Conservation Trust.  It's really cute!

What happened to all the Dodos, narrated by Bill Oddie 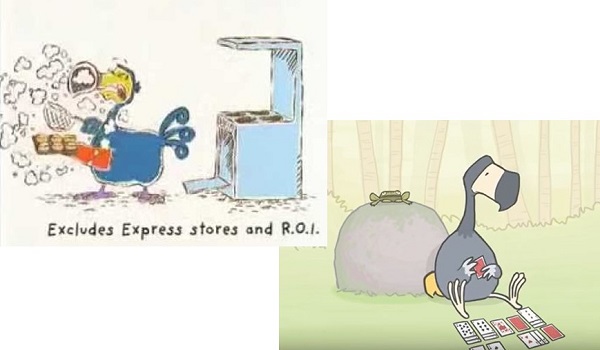